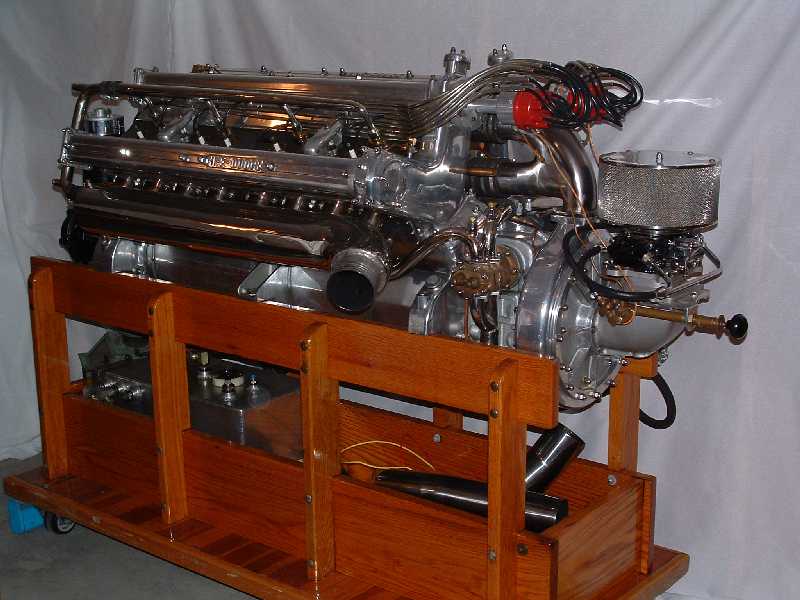 History:
Harry Miller, of Indianapolis fame, was the foremost race engine builder of the day.  In 1927 he built three 620 cubic inch V-16 engines for Gold Cup class speedboat racing.  Dr. S. C. Smith ordered one for Baby Chic, a Gold Cup built by Chris Smith; Harold Greening put his Miller in a Ditchburn designed Rainbow VI; and James A. Talbot had his Miller supercharged and installed in Miss Los Angles to compete for the Harmsworth Trophy.  Although the history of each engine is unclear; period racing reviews and articles provide a good record of two of the Miller V-16s which ran head to head in many races through the 1930s and into the1940s.

In the 1930, John D. Shibe, of Philadelphia obtained one of the Miller 16s for his Gold Cup Miss Philadelphia and raced it for two years.  The boat did not perform well, so Shibe moved on to his next project. The Gold Cup stepped-bottom race boat Ethyl Ruth IV was designed and built by John L. Hacker for the Miller 16.  The boat performed well, but the engine proved difficult and both were retired after the 1934 races.  After Shibes death in 1937, the engine was sold to Zalmon Simmons, who had the engine rebuilt by Charles Zumbach for My Sin.  Reliable and fast, this boat/motor combination won the Gold Cup in 1939, 1941 and again in 1946 when it raced as Tempo VI with Guy Lombardo. The last record of this engine dates 1949 when its crankshaft broke during the time trials in Joe Van Blercks boat Aljo/Gray Goose. Rumors claim that the winning Zumbach Miller is in a private collection, others suggest that it went to the Staten Island landfill.

Horace E. Dodge acquired his Miller in the early 1930s and installed it in Impshi, one of his Gold Cup racers.  It ran it in the boat for many years under a variety of names including Delphine VI, Hornet and Ethyl-Ruth III.

Around 1935, the V-16 threw a rod, damaging the crankcase beyond repair.  A major rebuild was undertaken at the Horace Dodge Developmental Laboratory involving three of the greatest names in engine design of the period:  Harry Miller, car and engine builder, J. Paul Miller, supercharger expert, and Leo Goosen, engine designer for Harry Miller.

Horace Dodge continued to race his souped up Miller 16 after the rebuild.  Records show it running in the English built Delphine VIII and Delphine IX in 1937 and 1938 and Miss Syndicate in 1940.  The engine was retired in the 1940s and stored in Dodges warehouse with his collection of racing hulls and engines.

Mark Mason acquired the Miller V-16 from the Dodge estate in 1980 and had it extensively rebuilt by noted Connecticut engine restorer, Harold W. Rivard. A new crankshaft and all new supercharger gears, pistons and many other parts were made during the restoration.

In 1994, David L. Coffin, new owner of Ethyl Ruth IV purchased the engine and had race mechanic Douglas Bindrim continue the project, and prepare the engine for installation in his newly restored Ethyl Ruth IV.  The last remaining Miller 16 has been running at vintage race boat regattas since.