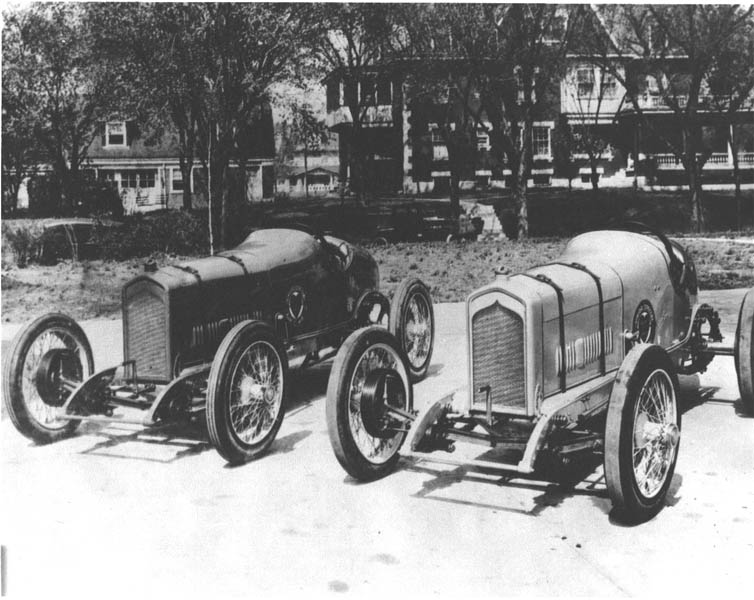 After World War I, a wealthy Kansas City oilman, C.L. Richards caught the racing bug.  He had Riley Brett build him a 288cu.in. 6 cylinder Hudson based race car for the 1919 Indy.  The car finished 32nd.  For the 1920 Indy 500, Richards had Riley Brett, Cotton Henning, and W.W. Brown build a completely new 181cu.in., DOHC, 24 valve, 6 cylinder engine.  This engine was built in 1919 in Kansas City and is the one featured in this story.  The engine was placed in a Hudson chassis and placed 11th in the 1920 Indy.  Not satisfied with the Hudson chassis, C.L. Richards ordered two new chassis from Harry Miller.  They were built by the Miller factory in 1920 and shipped via rail from California to Kansas City.  Another 181cu.in., 6 cylinder, DOHC, engine was constructed and the two cars were completed by the end of 1920.  The cars were named "Junior Specials" after C.L. Richards' son.  In articles written by the late Jerry Gebby, one of our most noted racing historians, who heard the cars run at Indy, (went to over 40 Indys) the Junior Specials were the noisiest engines he ever heard anywhere.  (He was referring to the actual engine noise, not just the exhaust note.)  In the 1921 Indy, Brett finished 15th and Fontaine finished 21st.  That ended C.L. Richards' Indy effort.  However, the cars lived on.

George Wade, another wealthy oilman from Kansas City, bought both cars and campaigned them in the Midwest.  One car was wrecked in 1922 in Franklin, Nebraska while the other car continued to race.  In the mid 1920s Fred Lecklider obtained the cars and took them to California.  One car was in wrecked condition (not running and in boxes) and the other in running condition.  The existence and location of the running car now disappears into the veil of history.  Meanwhile, the wrecked car parts, including the complete engine and transmission, were bought by Giles Johnson in the early 1930s and brought to Seattle.  He kept the parts until his death around 1975.  The Jarvis Brothers from Woodinville bought the parts and kept them for a short while.  Dave Hedrick then acquired the remains of the Junior Special from them.

The surviving engine is reputed to be the oldest American-built DOHC 6 cylinder racing engine in existence that competed in championship racing.  Its design was very advanced for the time, advanced even for today.  The head has individual runners for each of the valves: 4 per cylinder.  The iron heads are detachable and are cast in three blocks of two cylinders each.  The block and crankcase unit is aluminum, cast from World War I surplus mess kits (high quality aluminum ingots were not to be found in Kansas City).  The cams act on the valves through radiused cup-type cam followers, which according to Griff Borgeson was the first example of this design in the world.  These cups are also cutaway around the edges to reduce their weight.  The cams and front geartrain, with 11 straight-tooth gears, run in 38 ball-bearing bearings.  The connecting rods are tubular Miller-style.  The engine is also unusual in its use of battery ignition, adapted from a Delco aircraft system.  The first engine ran with 3 Miller carbs while the second engine ran 2 with carbs.  The complete engine was custom made with the exception of the Hudson Super Six crankshaft which had additional counterweights added.

The Miller engine-less chassis supplied for the Junior Specials were among the first eight Miller chassis built.  They were virtually identical to the TNT, Vail, and Durant Millers, confirmed when Dave Hedrick owned the TNT car.  The Miller transmission was made in 1919 and is reputedly the oldest all-original Miller transmission.  The clutch is a Hudson-style, multiple-disk with cork facing.  During the restoration, the body was fabricated by Dennis Webb.